Following is the first in what we hope will be a series of stories from members: 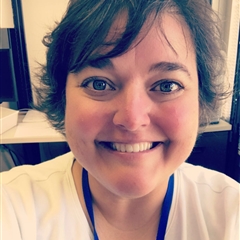 My name is Dusty Huff and I have been at Public Health Dayton and Montgomery County since 1997, first as a registered nurse and now as a family nurse practitioner.  Over the past 21 years, public health nursing has etched its place firmly in my heart and I love providing care to the community that I call home.  There have also been many patients that have made a lasting impression on my heart and mind, so I decided to share this story.

Several years ago I was working in the immunization clinic and was called to help a coworker with a child that was less than thrilled to be there.  When I walked into the room there was a small boy hiding behind the door with tears silently streaming down his face and splashing onto the floor.  As I tried to coax him out of the corner, I noticed that he had something written in ink on his red t-shirt.  When I asked him what it said, he repeatedly said “I don’t know” and just shook his head while looking at the floor.  The adult that was with him that day told us he had written Spiderman on his t-shirt because there was going to be a Halloween parade at his school later that week and he did not have a costume.  Long after this child had left, I couldn’t shake the picture of sadness in his eyes and I decided to ask the registration staff if they happened to catch the name of the school he attended.  As luck would have it, one of them knew!  After calling the school to ask if they would deliver a costume to the child if it was brought to the school the hunt was on for a Spiderman costume.  Armed with money that our staff had collected, I went to several stores unable to find a costume.  I did however find a Batman costume, which I purchased and delivered to the office the next morning.  I never told them where I was from, just who the costume was to be given to.

A couple of weeks later, a thank you note arrived from the boy’s teacher explaining how much it meant to him and that he marched proudly in the parade as Batman.  She went on to say that she had been his teacher for 3 years and this was the first time he had a costume.  Tucked inside the note was a polaroid picture of a boy dressed as a superhero, arms raised triumphantly in the air looking like he could conquer the world.  My hope for this child is that he feels valuable, he knows that people care about him, and maybe one day he will have the opportunity to pay it forward.  I still have his picture and I look at it from time to time when I need a reminder that good trumps evil and that superheroes really do exist!